On 7 January 2016, Diplomaticourier.com published an interesting comparative analysis entitled “The Race for the Next UN Secretary-General (UNSG): Which Candidate Fits the Profile?” by Joël Ruet, Director of the Bridge Tank in France.

It is worth reading this fresh analysis, which–for the first time–is trying to rank the current nine potential candidates for UNSG from Eastern Europe! What has been lacking until now is exactly “a comprehensive analysis of each individual’s attributes and suitability” for this important international role. 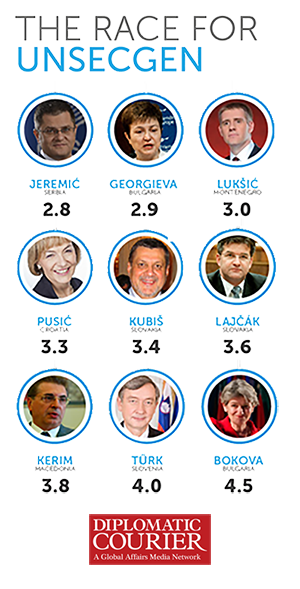 The criteria used in this comparison are based on the requirements officially specified in UN documents. Regional and international political experts from the five permanent members of the UN Security Council (UNSC) and from across Eastern Europe have provided their inputs on each candidate and in each criteria allowing for the creation of a “comparative tableaux” on the likely UNSG candidates.

“As Ban Ki-moon’s current tenure comes to a close in 2016, January sees the start of the marathon campaign for the selection of a new UNSG. After months of anticipation, the UN General Assembly (UNGA) has now circulated a joint letter to all member states inviting official nominations for the position detailing the qualities and requirements needed to lead the United Nations.

The UN convention of regional rotation means that, international politics permitting, the next Secretary-General should come from Eastern Europe (EE). Pressure from advocacy groups such as ‘1 for 7 billion’ and ‘SheUnited’ as well as the Colombian-led initiative pushing for a female Secretary-General appear to have found fertile ground in the UNGA and the UNSC.

All potential candidates will undergo thorough and vigorous vetting from member states, and must somehow transcend regional and international political hurdles. They will also likely face hearings in the UNGA. The next UNSG faces challenges both new and old, and each candidate will take the opportunity to articulate their vision for the organization and the global challenges that urgently need to be addressed under their leadership.

Emerging threats such as increased international terrorism and deepening religious intolerance are now recognized as destabilizing issues alongside more established issues of climate change, poverty and inequality, and the long overdue institutional reform of the UN itself.

Several leading candidates are already in the “rumor mill”, but what has been lacking until now is a comprehensive analysis of each individual’s attributes and suitability for the role. Having never held the position of UNSG, which like all senior UN posts is supposed to be rotated among the regions, Eastern Europe is now long overdue the opportunity to get this prestigious role. We have examined the leading nominated and potential candidates from that region, and assessed their suitability for the position (the likely leading candidates from within “EE region” are provided on the leading “comparison graph”)

The UNGA resolution of 11 September 2015 established a series of qualifying recommendations and attributes that the most suitable candidate should possess. The contents of UNGA letter and the known attributes of previous candidates have provided enough data to allow for a thorough comparison of the current candidates. As part of our methodological approach, regional and international political experts from the permanent members of the SC, as well as from across EE have provided their input on each candidate and in each criteria allowing for the creation of a comparative tableaux on the likely UNSG candidates.

The following criteria were examined, which we reclassified in three sets, the firstpertaining in a sense to professional skills, the second to political acceptance, andthe third to public acceptance at a time when the UN wants to modernize its image. These groups include:

We examined the criteria and compared the candidates, assigning a mark between 1 for a poor score and 5 for an excellent score for each candidate in each criterion. Based on their experience and capabilities, an average score from each equally weighted criterion is assigned to every candidate with the exception of gender.

In light of recent momentum for a woman SG, gender will have a significant impact on the scoring. In this matter however, giving only a full mark of 1 for men or 5 for women would have led to disproportionate effects even if it was only one of twelve parameters; thus we keep it as a sort of “dummy variable”: 2 vs. 4. Proven leadership and managerial abilities are seen as fundamental requirements, as are extensive international and diplomatic experience. An ability to converse easily in many of the official UN languages is a significant positive for any candidate, and any previous UN institutional experience will strengthen a candidate’s case. The final candidate must also be politically acceptable to the permanent members of the UNSC whilst bridging divisions in EE’s regional politics.”

The detailed scoring of all candidates and the results of their comparison based on the above methodology are provided in Table 1 and Table 2 contained in the original publication.

“The current head of UNESCO, Bulgaria’s Irina Bokova appears by far the strongest candidate from Eastern Europe. She scored above 3 on all criteria, and obtained the maximum score of for 8 criteria. Her total average score of 4.5 places her “head and shoulders” above the others. The low variance within her scores demonstrates consistency across all aspects of the profile (emphasis added).

A second group of candidates is led by Slovenia’s Danilo Türk, and includes the Croatian Vesna Pusić, Miroslav Lajčák, and Ján Kubiš equally of Slovakia, Macedonia’s Srgjan Kerim, and the Montenegrin Igor Lukšić. They all score between 3.0 and 4.0 and all enjoy strong reputations and solid profiles.

Our analysis reveals that the two weakest candidates by far are the Bulgarian European Commissioner for Budget and Human Resources Kristalina Georgieva and Serbia’s former Foreign Minister Vuk Jeremić, who respectively score 2.9 and 2.8. Neither of them has a serious chance of succeeding Ban Ki-moon.

It is equally important to measure the variance (Table 2) of scoring to ensure that candidates have no gaps. The smaller the variance, the more consistency of the profile. Bokova scores 0.5 while all others are above a score of 1.1. Kubiš and Jeremić rise above 2.3, which is probably too high. Last but not least, these results are not affected by counting or discounting gender as a factor (Table 2); so, all things being equal, we can expect to see a woman elected as UNSG through merit rather than by any question of affirmative action. At any rate a new time for the UN has come.”

My main conclusion from this latest publication by Joël Ruet is: a very capable and experienced female diplomat from Eastern Europe, Ms Irina Bokova, currently Director‑General of UNESCO, could easily be selected and recommended by the UNSC based only on her demonstrated diplomatic, managerial, communication and leadership merits.

Further specific points have already been put forward in other publications to the effect that “while Ms Irina Bokova remains UNESCO’s DG, she appears to be the only “electable” potential candidate from EE”. These findings substantiates the collective claim of the East European Regional Group (EERG) in the UN at New York that the “rotational term” of their region should – this time – be fully respected after 70 years of partial disregard of the principle of equitable geographical rotation with respect to the UN regional groups on the highest UN position.

What now remains is the formal nomination of some or all of the “strong candidates” from Eastern Europe in anticipation of the forthcoming UN selection process.

The comparison provided above clearly indicates which person might become an “electable candidate” under UN standards. The same comparison can be used as a “reliable guidance” for nominating governments to decide soon – (a) “to nominate” or “not to nominate” any of these candidates, and (b) which candidate exactly should be nominated to maximise the chances for final success!

Dr. Radoslav Denayov is a former nuclear physicist turned-diplomat & international civil servant who has retired from his extensive career assignments in London, Geneva, New York, The Hague and Vienna, including his 15-year work in two international organizations (OPCW & CTBTO) of the UN system. He has a Ph.D in History and Political Science from the Institute for Balkan Studies. He is currently an independent consultant (RAD Consulting) in international affairs & diplomacy, results-based planning and management, quality control, staff management & training.