Nominations for judicial candidates (and the ICC Prosecutor) opened this past Monday, 13 June and will run through at least 2 September. If certain minimum voting requirements are met, the election will be held during the tenth session of the Assembly of State Parties which opens on 12 December. If they are not, the President of the Assembly of State Parties may decide to extend the nomination period as much as six weeks.

What are the minimum voting requirements? 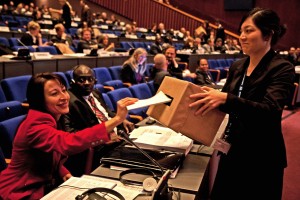 The Rome Statutes stipulates that elections to the ICC bench must meet minimum voting requirements (MVR). These will not in any way restrict who may be nominated but rather will structure the election in December to ensure the bench does not reflect any one regional group, gender, or judicial expertise.

Mr. Christian Wenaweser, the current Assembly President, may keep the nominations period open if he feels that those nominated by 2 September cannot ensure the MVR will be met in December.

The Statute sets out the following parameters to which the MVR refer:

The MVR do not establish a quota system and do not guarantee a minimum number of seats on the bench. Rather they provide parameters which guide state parties during voting to correct for any over-representation among the remaining jurists.

If by 2 September, the President finds either that

he can extend the nomination period by two weeks, and can do so twice more if these conditions persist.

Six justices will leave the bench this year and their replacements elected by secret ballot from among the nominees put forward by state parties. In 2004, the Assembly outlined the desired composition of the bench, against which the MVRs are applied.

Each Party shall vote for a minimum number of candidates from each regional group. This number shall be 2 minus the number of judges from that regional group remaining in office or elected in previous ballots.

Of the remaining judges, the African, Asian and Western European and Other regions will have a sufficient number remaining on the bench to avoid a minimum voting requirement, but at least 1 East European nominee will need to be elected as will 2 candidates from the Latin American and Caribbean region.

The same resolution which set out regional and expertise requirements for the bench also provides for a minimum of six judges of each gender. This year, eight of the twelve remaining justices are female, so no minimum number of women nominees need be elected. Four female candidates may be elected, but no more as at least two of the elected justice will need to be men (6-4 = 2), to meet the necessary MVR.

In short, for the upcoming election, the following MVR will apply:

In order to be elected, candidates must receive a 2/3 majority of the states parties present and voting. In each round of voting, each State Party has a number of votes equal to the number of vacant positions left to be filled, taking into account the MVRs.

Thus in the first round, states parties may vote for up to six candidates, among whom should be at least 3 from List A, 2 from Latin America, 1 from Eastern Europe and 2 men. If in the first round, for example, a Latin American male with criminal law expertise is the only candidate to have received the necessary majority, the second round will thus require states to vote for up to 5 candidates, among whom would need to be 2 from List A, 1 additional Latin American, 1 East European and 1 other male.

The possible extension of the nomination period is to ensure that state parties may choose from a number of qualified nominees while meeting the MVR during the election 2-3 months later. The Assembly agreed that the President could extend nominations if the nominees received did not provide for at least the MVR for expertise or twice the number needed to meet the regional or gender MVRs. So, if by 2 September, at least 4 Latin American nominees, 2 East Europeans, 4 men and 3 candidates with criminal law expertise are not nominated, look for Mr. Wenaweser to extend nominations through 16 September to allow additional nominees to be put forward.

More detailed information on the procedure and minimum voting requirements is available from the Coalition for the ICC and Amnesty International.

Mariana Rodriguez Pareja is a communications expert and a human rights advocate, with a special interest in international affairs and gender Issues. She served as a media strategist for the Coalition for the International Criminal Court and in the office of the ICC's President. She is current a human rights lawyer attached to the permanent mission of Argentina to the United Nations.

4 thoughts on “Minimum Voting Requirements in the ICC Judicial Elections”