Secretary General Ban Ki-Moon has announced that several members of his senior management group will be asked to step down or move to another department when he begins his second term in January, reports Colum Lynch at Turtle Bay.

Ban outlined his plans in a meeting with his top executives early last week, saying that officials at the undersecretary general and assistant secretary general level will likely be asked to either move to another post in the field or leave the organization. The U.N.’s deputy secretary general, Dr. Asha-Rose Migiro, has been tasked with approaching top officials to deliver the bad news. 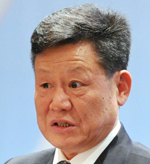 Lynch notes UN officials consider Ban’s chief of staff and the under secretaries general for management, political affairs, public affairs and General Assemnbly affairs are “all vulnerable.” Sha Zukang, the under secretary general for economic and social affairs who was expected to leave after Ban’s first time following a drunken rant last year during which he told Ban that “I never liked you” will likely stay on through the Rio+20 conference, an official told Turtle Bay.

The U.S. government is expected to nominate a replacement for the political affairs post if B. Lynn Pascoe departs. It almost certain that successors for the other posts will likewise be put forward from their respective regional groups if not the same countries.

One thought on “Ban cleaning house for 2nd term”